Even with economic headwinds, Australian hardware retail hangs onto past gains, and produced growth. September continued the August trend of generally exceeding 2021 hardware retail revenues. Total 12-month revenues continue to grow. Some states and territories have posted growth of over 30% in particular months. 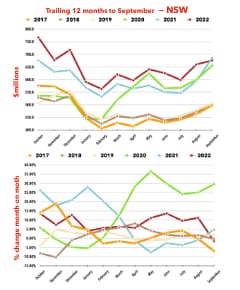 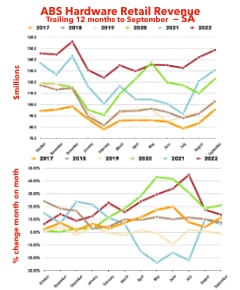 Will the December quarter be a record?

Even with economic headwinds, Australian hardware retail hangs onto past gains, and produced growth. September continued the August trend of generally exceeding 2021 hardware retail revenues. Total 12-month revenues continue to grow. Some states and territories have posted growth of over 30% in particular months.

The Australian Bureau of Statistics (ABS) has released retail sales figures for September 2022. The original numbers for hardware retail shows that the predicted trend has continued: not only has the high level of sales first established at the start of the COVID-19 pandemic in March 2020 continued, but the numbers have continued to grow.

Some extent of that growth has to be attributed to inflation. However, the counterpoint to this is that inflation could have created a decline in sales, or at least a levelling off. Instead, while the rate of growth might have gone down for September 2022, it remains surprising that given all the negatives - higher interest rates, declining prices for houses, more inflation, the promise of slow growth through to the end of 2024 (according to the Reserve Bank), sustained slower growth in wages, and future energy prices that will go up, but no one knows by how much - hardware retail continues to thrive.

To date, most of the projected barriers to continued hardware retail revenue growth have not eventuated, or were milder than expected. One such concern was over an increase in expenditure on travel reducing the pool of funds available for non-necessity expenditure. As the Chart below indicates, while expenditure on travel has increased through 2022, it still remains well below the level of 2019. The lower graph indicates that gap.

That said, it is also likely that this gap will continue to close during 2023, and this could still result in a reduction in hardware retail revenues, especially as the backlog of construction activity is reduced.

As usual, the charts below cover 12-month periods ending in the month for the most recent stats, which is September. We refer to these periods with the prefix "p", so p2019 would be the 12 months from October 2018 through to September 2019.

It remains surprising to HNN to look at these charts, and to see the big gap between retail sales prior to March 2020, and both the pandemic and post-pandemic sales. Looking at the top graph in Chart 1, the other point is just how consistently strong sales for p2022, with only the highest peak of p2020, in May, posting higher numbers.

The lower graph retraces a familiar pattern of growth post-pandemic. There is the high arc of sales growth in p2020 and p2021, from March 2020 through to January 2021, balanced by the decline in growth through the remainder of p2021. Growth for p2022 is evenly balanced between those two, which is a good indicator of stability.

New South Wales (NSW) continues to show the most robust growth of any state or territory, with half of p2022 producing over 10% growth, as the lower graph in Chart 2 indicates. Most notably, four of those six months were after the start of interest rate rises, running from May through to August 2022. While growth appears to have declined for September 2022, that is actually a consequence of very strong sales in September 2021.

It will be interesting to see if NSW can match the record sales for the December quarter that were produced in 2021, with those three months producing $2.16 billion. That contrasts with $1.60 billion for both 2018 and 2019, and $1.94 billion in 2020. This includes the highest ever monthly sales number in Australia, at $767 million for the month of October 2021.

As with NSW, VIC has shown resilience in the face of interest rate increases, with sales from July to September 2022 showing steady growth of 5%, illustrated in Chart 3.

QLD has demonstrated steady growth through p2022, as the lower graph in Chart 4 indicates: for all but two months growth has been at or above 5%.

South Australia (SA) is the only state to show a sustained high rate of growth in hardware retail revenue during p2022, hitting a peak of 44.9% in July 2022, as shown in the lower graph of Chart 5.

As with the other states, sales in August and September 2022 indicate that economic conditions have yet to negatively affect the SA market.

Western Australia (WA) had a somewhat unique experience for the pandemic period, bringing in effective measures to remain nearly COVID-19 free until late 2021. While the state saw some significant growth, it remained modest, with the state's boom year of 2016 outperforming the pandemic gains in some ways, as shown in Chart 6.

Like WA, Australian Capital Territory (ACT) had a somewhat unique pandemic experience. As Chart 7 shows, there has been a strong upswing in revenues for August and September 2022.

Like SA, the territory has seen some very high percentage increases in growth, topping out at over 40% for September 2022 - though that is driven in part by a sharp decline in sales for August and September 2021.

One of the big questions that will be faced in calendar 2023 is how each state will fare individually as economic conditions continue to tighten. It seems likely that NSW will continue to be something of an economic powerhouse for Australia. However, HNN believes it is possible the VIC economy will struggle. The effects of its severe experience during COVID-19 are not generally understood all that well outside of the state, and these have left both scars on the community and the state's economy.

What does seem clear, however, is that the other states have made up some ground, at least in hardware retail, over the two major states, and there is some hope this will continue. The final quarter of 2022 will reveal much about each state's prospective future.