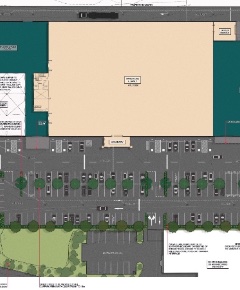 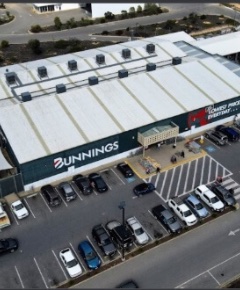 The new $16 million Bunnings outlet in Murray Bridge, located around 78 kilometres east-southeast of Adelaide in South Australia, has opened to customers.

The new store replaced the existing smaller building, just down the road, which opened in 2009. It spans around 7500sqm - more than 3000sqm larger than the existing store.

Features of the new location include a four-lane trade drive through, a larger nursery, and tool shop, plus an in-store cafe and playground. It also has a new Kitchen Design Centre, a newly laid out paint department, bathroom displays, new look trade service area, a wider range of site safety and workwear products, as well as an aisle for transport and moving needs.

Bunnings complex manager Jade Sander is leading the Murray Bridge team of 95 and, according to Bunnings, the new store has created over 40 new jobs with around 50 existing team members transferring across from the existing store.

Ms Sander said team included a number of skilled experts in areas such as timber, tools, paint, kitchens, plumbing, garden and outdoor living who will be on hand to provide residents with expert advice. She told The Murray Valley Standard:

The new store offers a convenient option for locals who may have previously travelled to larger stores or placed orders with us to access our full range.

In 2020, a report prepared for the council by consultants URPS described the new store as a "significant investment" in Murray Bridge, but one which would be justified as the city's population grew.

Bunnings was encouraged by the local council's Make It Yours campaign, which predicted the district's population would reach 29,000 in a decade, the consultants said.

URPS predicted the expansion would allow Bunnings to generate an extra $70,000 worth of investment for local community groups each year, including by hosting sausage sizzle fundraisers.

The doors of Bunnings' new store on the Newell Highway, north of Narrabri (NSW) are expected to open by October this year.

Bunnings area manager Deb Thompson said recruitment for its local store had been completed, with around 40 new team member jobs created in the community. She told the Narrabri Courier:

Internal racking, shelving and signage has now commenced, and car park and landscaping works are ongoing. We will soon be busy filling the shelves with thousands of products as we prepare for opening and we look forward to welcoming customers to the new store soon.

External barriers have come down as the outside work of the store development nears completion. Workers are busily preparing the car park and vehicle entry areas ahead of the opening.

While the external work nears completion, the focus is shifted on the internal fit-out in anticipation of the October opening.

The development of a Bunnings store represents a $15 million investment in the venture, and it is anticipated the Narrabri store will cater for the North West region. The store will span more than 5000sqm on its highway site, on the edge of the Narrabri industrial estate. It will feature a main retail area, outdoor nursery, timber and building materials area, as well as parking for more than 80 cars.

When Bunnings submitted its development application in 2020, it estimated that $15.1 million was spent at hardware businesses outside the region, including at Bunnings stores in Tamworth and Inverell. The company said in its response to submissions lodge in relation to the development in 2020:

The proposed Bunnings Narrabri represents a tangible expression by Bunnings (and parent company Wesfarmers) in support of the economic potential of the town, and the important regional service role and function that Narrabri serves to surrounding areas...

This includes the ability to attract customers seeking access to a Bunnings from other towns in the surrounding region, including Moree, Boggabri, Wee Waa, etc.

The proposal reflects a strong level of confidence in the economic prospects of the town and region, rather than a concern relating to economic vulnerability.

Of 35 submissions, 32 were in favour of the project, and three were against.

As part of the development approval granted by Narrabri Shire Council in 2020, Bunnings will enter into a voluntary planning agreement to pay a contribution towards upgrades to the intersection of Newell Highway and Saleyards Lane to accommodate an increase in traffic as a result of the store.

While the store will have prominent exposure with its frontage on the Newell Highway, access will predominantly take place from Saleyards Lane.