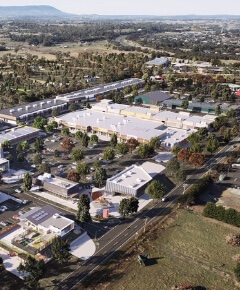 The Victorian Civil and Administrative Tribunal (VCAT) has dismissed a claim that a Bunnings store cannot be built in Kyneton (VIC).

In 2021, developers took the Macedon Ranges Shire Council to VCAT after it failed to make a decision fast enough on their application for a Bunnings store 1.6km away from the centre of town in Kyneton. It would be the anchor tenant for a collection of retail premises.

The council told VCAT that if it had made a decision, it would have opposed the Bunnings on a number of grounds, according to a report in the Bendigo Advertiser.

It argued the Bunnings building would clash with the area's unique, rural township character and detract from a gateway into Kyneton, in part because motorists would be able to see it from the Calder Freeway. The council told VCAT:

While the proposal is an appropriate use of the site, the development response fail [sic] to recognise the sensitivities of the site.

Witnesses for the developers argued the building's design was one Bunnings had used at other regional locations.

VCAT described the building as a generally typical Bunnings Warehouse design, with a low-pitched roof, dark green metal cladding walls and white panelling along the lower portion of the facades.

VCAT said the land was not at the town's border and was in an area zoned for commercial use, with industrial lots already visible to people entering that part of town. It also expected the rural feel of the area would change over time, and that building designs and landscaping would soften the Bunnings' visual impact.

The council lodged a number of other objections that failed to sway VCAT. They included arguments that more landscaping was needed, especially to soften the building and car parking from roads like the Calder Highway.

The council also argued designs for a 190-odd space car park could be more pedestrian-friendly.

In Star Weekly, the council said it was "disappointing" a Bunnings is now on the way to the outskirts of Kyneton.

Last year, the council knocked back two separate proposals for land at the intersection of Edgecombe Road and Pipers Creek Road, which included plans for a Bunnings Warehouse. It received more than 500 objections to the proposal.

The decision was appealed at VCAT, and while the proposal for a service station and attached McDonalds at the same location is still pending, the tribunal granted a permit to construct a building, put up signs and create access and parking for Bunnings.

The council's planning and environment director Rebecca Stockfeld said it had blocked the planning application for a range of reasons which had not been addressed by the VCAT decision. Ms Stockfeld told Star Weekly:

The proposal had detrimental amenity impacts, a poor design and interface with its surrounds, inadequate landscaping, removal of native vegetation, and poor layout for pedestrians within the car-parking and access areas.

The VCAT decision to approve the development with little change to the design is disappointing.

The approved Bunnings will have a generic design, similar to many others in large cities, rather than responding to the unique character of Kyneton and the Macedon Ranges.

A spokesperson from one of the four respondents to the VCAT hearing, the Macedon Ranges Sustainability Group, said they could not comment at this stage as an appeal for the second proposal was still underway.

At a council meeting in September 2021, mayor Jennifer Anderson said developers for both applications had not met the necessary standards for approval. Cr Anderson said last year:

We are now declared an area of distinction and landscape, and we have a standard of planning policy and we must look at when we look at any application. It is mandated upon every authority to do so, and the officers have assessed this application against that and feel that it doesn't meet all those criteria.

Ms Stockfeld said council would "continue to push for new developments to comply with the design standards incorporated within the Macedon Ranges Planning Scheme" into the future.

A proposal for a Kyneton store in regional Victoria has been rejected.

A new development in the central Victorian town of Kyneton includes a Bunnings.