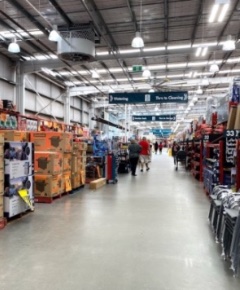 Brunswick locals score a win over a Bunnings development

The proposed two-storey store was to be 15.4metres in height with a floor space of around 8,600sqm. An underground park was planned with 236 parking spaces. In Daily Mail Australia, VCAT said in its ruling:

This proposal has failed to achieve this outcome in an acceptable manner when all relevant policies are balanced in favour of sustainable development and net community benefit.

The development site is surrounded by more than 120 homes, mainly in apartment blocks, and on a congested council road, which includes bike lanes and is a popular pedestrian route.

Brunswick resident Andrea Bunting, president of the Glenlyon Bunnings Action Group who spearheaded the campaign against the development, said the site - on the corner of Pitt Street and Glenlyon Road - would have made the environment "unsafe" for cyclists and pedestrians.

With operating hours of 6am to 10pm, Ms Bunting argued that the project would have had an adverse impact on residents because of traffic congestion due to delivery trucks and trade vehicles. She also said the building would be situated on an already busy street.

The design failed to incorporate a safe way to safely enter and leave the site on a congested road.

The VCAT panel recognised the local action group's issue with traffic congestion in the area and stated the project did not align with state government and council policies trying to reduce traffic in the inner-city. The panel said that the planned store would also create traffic "saturation" at a nearby intersection.

Naturally we're disappointed with the Victorian Civil and Administrative Tribunal's decision not to grant a planning permit for a new Bunnings Warehouse in Brunswick, and will now review our options with the developer of the site.

We're mindful of the positives a new store would bring over and above providing customers an improved offer. In addition to the $46 million investment in the economy, the proposal would create more than 50 new local jobs on top of our existing Bunnings Brunswick team.

Bunnings has been part of the Brunswick community since 2015 when we opened our Sydney Road smaller format store. We remain committed to providing local customers in Brunswick with a wider range of home and lifestyle products.

There was a community outcry at the initial Bunnings proposal, in August 2020, with 538 residents submitting objections to Moreland City Council in the middle of lockdown. According to Green Left, Nic Maclellan of Brunswick Residents Network said:

For many months in 2020-21, Moreland Council staff had engaged with the Bunnings developer, without addressing the fundamental flaws of their application - especially around impacts on neighbouring apartments and on traffic congestion.

It was only after a massive community campaign and hundreds of objections that Council fully came on board, with councillors rejecting the permit application and Moreland hiring a barrister to contribute to the case before VCAT.

More than 200 residents donated $44,000 to the residents' VCAT case, with more than 50 residents becoming parties at VCAT.

While the developers engaged a QC for the 12-day long case, residents engaged two experts, and a planning advocate to argue on their behalf. It was money well spent, with the residents' advocate winning most of the arguments.

The case is significant for several reasons, according to Green Left. Many apartment blocks are now being built in commercial zones and, typically, residents have fewer rights than those in residential zones. The Bunnings developer argued that residents in commercially-zoned properties just had to put up with terrible impacts. VCAT disagreed.

Neil Moreton, who represented many of the residents in an adjoining apartment block noted:

Bunnings wanted to locate the exit lane for its delivery trucks right next to our balconies. The noise would have been horrendous. VCAT agreed with us that this was completely unacceptable.

Moreland City Council aims to reduce car use and increase walking, cycling and public transport. The Bunnings Warehouse would be a huge backward step in achieving its aims. Pedestrian and cycling advocates also participated in the VCAT process. Faith Hunter from Moreland Bicycle Users Group said:

We are very happy to see VCAT's decision affirming that the proposed Bunnings development at Glenlyon Road doesn't strike the right balance with sustainable development and net community benefit.

In particular VCAT has recognised the substantial negative impacts on the local transport networks, particularly pedestrian and cyclist networks. These impacts directly affect the ways in which families and others will choose to travel on a daily basis.

Residents in Moreland engaged in lengthy consultation processes over several years to help Moreland Council develop the Moreland Integrated Transport Strategy. This reflects their interest in and aspirations for increasing opportunities for active transport and mode shift.

The VCAT decision affirms that developers cannot seek to make profits at the expense of local communities and their transport networks, either as they are now or as they plan for them to be in the future.

Ms Bunting said the decision was a "great relief" for locals:

Residents generally do want a say in shaping their community, but they get frustrated with the planning process. Too often, they are stacked in the favour of developers, especially those with deep pockets. This victory shows that, with a well-organised campaign, it is possible to win.