The board of the ASX-listed building materials giant fired the CEO over his "intimidating, threatening" and disrespectful behaviour towards colleagues. 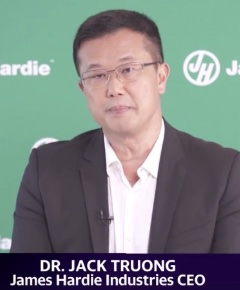 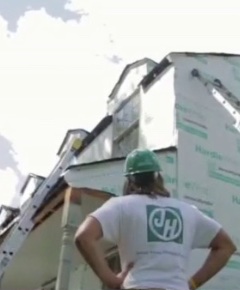 The board of the ASX-listed building materials giant fired the CEO over his "intimidating, threatening" and disrespectful behaviour towards colleagues.

The abrupt dismissal of James Hardie CEO Jack Truong seems to be shift in the way public companies sack their CEOs over their behaviour.

In a statement to the ASX, the company announced the immediate exit of Mr Truong, after an "extensive and material" breach of its code of conduct.

Executive chairman Michael Hammes said terminating Mr Truong was a difficult decision but came after extensive due diligence from a third-party consultant and staff threatened a mass exit.

James Hardie said the board had received reports from employees in recent months about Mr Truong's work-related interactions. The company hired a third party to help investigate the claims and said it offered coaching to Mr Truong, but he did not alter his behaviour and refused to accept the need to change.

When executives threatened to leave, the board decided to remove him. Mr Hammes said:

It was clear that sincere change did not occur. Jack's behaviour remained inconsistent with the James Hardie code of conduct. It was not discriminatory, but Jack's behaviour was cited by the management survey as intimidating, threatening and not respectful of the individual.

Mr Hammes said James Hardie interviewed the 30 to 50 people who daily worked with Mr Truong, and about 80% of those people reported inappropriate behaviour.

He is a very tough, very demanding kind of executive. That is fine, That is the culture of Hardie.

This was not a chemistry problem between Jack and his senior team. It was something much more fundamental. Our code of conduct is to treat people with respect to all cases, period full stop, and that wasn't happening.

On an investor call, Mr Hammes ruled out resetting James Hardie's culture, known for being "aggressive" and "upfront".

That culture won't change and shouldn't change. It needs to be managed with understanding and respect for people and that's what we'll take.

Mr Truong's departure comes as he oversaw a strategic transformation during his three years at the helm, which Mr Hammes praised while revealing a profit upgrade. Mr Hammes said:

The transformation that has occurred over the past three years is truly remarkable. The company now has a clear, correct and very well-defined strategy that is aligned with what the board and management identified as necessary in 2017. This strategy is now deeply embedded throughout the organisation, from the line employee at our plants all the way to the executive leadership team.

However Mr Hammes said the work environment under Mr Truong had become "too hostile".

James Hardie has appointed non-executive director Harold Wiens, who persuaded staff who intended to resign to stay at the company, as the interim chief executive. Mr Hammes said a permanent chief executive might be appointed within six months.

In response, Mr Truong has hired lawyers and is considering potential legal action against his former employer.

A public relations firm hired by Mr Truong confirmed to the Australian Financial Review (AFR) that he was considering his "next steps" and had retained legal counsel..

When the buildings supplies manufacturer fired Mr Truong, it scrapped his on-foot incentives, including unvested long-term bonuses. The executive walked out the door with just his statutory entitlements.

James Hardie appointed Mr Truong in May 2017 as president of international operations before promoting him to CEO in 2019 when he was tasked with transforming the global building materials company, according to the AFR.

Under Mr Truong's leadership, James Hardie recorded a rise in annual revenue of USD400 million, with shares climbing more than 363% since 2019.

The company is now expecting full year net profit to be between USD605 and USD625 million, up from previous guidance of USD580 million to USD600 million. The increase would be driven by higher earnings across strong residential and market growth in the US.

For James Hardie, there seems to be a question over the strategy unveiled by Mr Truong in mid-2021 which commits to a 3M-inherited lean manufacturing model and direct marketing push to homeowners looking to renovate.

The company has profited from soaring demand for home renovations. The trend had been exacerbated by the COVID-19 pandemic, which required people to work from home and largely curtailed travel. Discretionary spending on renovations climbed despite shortages in building materials and difficulty in booking tradespeople.

The firm benefited from television and social media campaigns that targeted homeowners directly, letting them know what options were available for an overhaul of an exterior and an upgrade inside.

Management experts say companies and employees are losing tolerance for workplace bullies. In The Age, Natalie James, a former Fair Work Ombudsman who now leads Deloitte's Workplace Integrity Team, said the "MeToo" movement highlighting sexual harassment and misconduct in recent years had sparked a broader rethink of what was acceptable in the workplace.

The heightened public debate about sexual misconduct has also extended into other conduct, particularly bullying because often the two come together.

(Ms James was speaking in general terms and not specifically on any company or executive.)

Ms James said many employees previously tolerated intimidating and humiliating behaviour from their managers because it was "just the way things are around here".

Now people, particularly younger people, are saying: that's not OK by me and I have choices, and I'm not going to work in a place where this is how things are done. There has been that moment where people have reflected on conduct that was perhaps normalised or considered banal in the past and now it is being recognised as harmful.

It's around, first and foremost, reputation and it's also around talent retention in this age when people want to see purpose and value in their work.

Mark Schmitt, who runs the workplace mental health consultancy Thrive In Work, said bullying remained "rife" in corporate Australia, but agreed it was becoming less accepted as companies realised workers would underperform and eventually leave if they failed to provide "psychological safety". He told The Age:

Our expectations of how we are treated are changing, and it's obviously changing for the better.

Mr Schmitt said it would take workplace safety regulators to start prosecuting more of these cases for employers to treat the issue with the seriousness it deserved. He said:

Australian boards have a long tradition of obfuscation when it comes to telling the market about the departure of CEOs who get the boot for overly aggressive and disrespectful behaviour.

The most common approach has been to say the CEO left for "personal reasons" and leave it at that. This leaves the market confused and allows all sorts of wild theories to fill the vacuum.

Often, boards have bowed down to the demands of a disgraced CEO and kept secret the details of what really happened. This allows generous payouts or certainly payouts that are better than the terms allowed under a "termination for cause".

Accountability is a critical aspect of corporate governance and should not be the subject of negotiation.