The ABS stats for building work done show just how unusual the current government stimulus is, and how it affects the construction industry. While it has ramped things up, is this necessarily a good thing? 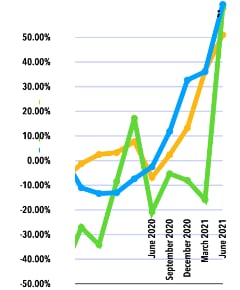 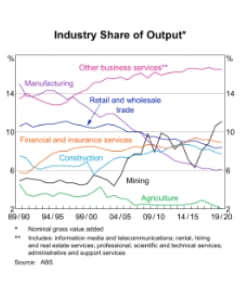 The stimulus shows its effects

The ABS stats for building work done show just how unusual the current government stimulus is, and how it affects the construction industry. While it has ramped things up, is this necessarily a good thing?

The Australian construction industry today is clearly subject to government stimulus. That stimulus, during the COVID-19 pandemic, has come from two main sources: historically record low interest rates for home loans, and a subsidy package known as HomeBuilder launched in the first half of 2020.

It's helpful to note that immediately before these measures were put in place, the federal government had gone to extraordinary lengths to create a "balanced budget" for FY 2019/20 - remember the "back in the black" media campaign? This meant that the construction sector - among others - had received little if any stimulus from July 2019 onwards. The pandemic arrived about eight months into this artificial reduction in expenditure - about the worst possible moment.

With that as a background, it is not hard to understand why both the government and the Reserve Bank of Australia (RBA) - which sets interest rates independently - were concerned the pandemic might crash the economy. They reacted swiftly, but there are serious questions, today, as to whether they over-reacted, and, particularly, whether they reacted in the most effective way possible.

One way to look at this is to revisit the controversy as to whether the recovery post-pandemic, if you were to chart the measures of its success, would indicate a "V" shape - effectively a snap-back to the pre-pandemic economy - or something more of "U" shape - a slow recovery after a sustained period of low growth. At the time, HNN suggested what seemed most likely was a "K" shape: some parts of the economy would snap-back, and others would recover only moderately, or even go into long-term decline.

We could say the goal of recent government stimulus has been to take the K-recovery (which, we would argue, is certainly what we've seen) and transform it into a V-recovery, by stimulating those parts of the economy that have been slow - or even unable - to recover on their own. The difficulty with this, of course, is that it means stimulus does not go to the most successful parts of the economy, with the goal of producing higher rates of growth, but rather to the least effective, and often less productive parts of the economy.

This is very much the basic predicament that has "wedged" most conservative-leaning governments around the world. Their popularity is based on people working in declining legacy industries, and they find themselves, once in government, having to "square the circle" of over-funding the most underperforming part of the economy while also claiming they can create economic growth.

To put that in direct terms, the best guarantor of Australia's economy performing better during the pandemic would have been a faster National Broadband Network (NBN). The original plans called for a fibre-optic backbone delivering gigabit speeds. What Australia got instead was a fudge of legacy technologies, slowly and reluctantly delivered - and which, even in this diminished form, likely helped protect the economies of Victoria (VIC) and New South Wales (NSW) (at the very least) during the pandemic.

In terms of the construction industry itself, it's self-evident this is a highly useful and essential industry that contributes much to both the economy and the community. It's commonly accepted that there are three basic needs for humans: food and water; clothing; and shelter.

Yet once you move beyond the basics of shelter for survival, housing and construction becomes a complex issue. It certainly produces goods that contribute to the economy, and assist it to increase productivity, yet its economic impact is very different from seemingly associated activities, such as manufacturing.

The confusion over the economic role of construction really results from the industry playing a dual role in the economy. In terms of providing economic support to a community, it's a very good way to deliver benefits. A report from Australia's National Housing Finance and Investment Corporation, "Building Jobs: How Residential Construction Drives the Economy", published in mid-2020, outlines the following contributions of construction:

New analysis shows that the residential building construction industry has the second-largest economic multiplier of all 114 industries that make up the economy.

The analysis shows that $1 million of residential building construction output supports around $2.9 million of industry output and consumption across the broader economy.

Each new home built would support three jobs (on average) across the economy, based on these newly constructed multipliers and current average dwelling costs.

Given those numbers it is understandable that, facing a potential economic crisis, any government - and central bank - would reach for the financial levers to boost expenditure and growth in that sector. However, this usually turns out to be a very short-term solution. In a 2019 paper entitled "The Economy and the Construction Industry", authors Low Sui Pheng and Lau Shing Hou provide a solid literature review on the issue. They state:

The pressures generated by the expansion of the construction industry may push up the costs of inputs (such as labour and materials), affect the availability of financial capital for other uses, and intensify environmental stress. As a result, the over-expansion of construction activities may affect macroeconomic stability by generating inflationary pressures, and misallocating as well as wasting resources. The negative impacts of over-expansion of construction activities may considerably offset the real growth of the economy.

The Economy and the Construction Industry

The point here is that any government stimulus is essentially a downpayment that enables future growth. To the extent that stimulus is spent on endeavours that do not contribute as much as they should to the economic future, that expenditure is largely negative. It's the equivalent of building a fabulous highway that goes absolutely nowhere. There may appear to be a recovery, but it's really a facade over an economy that has not invested the stimulus in the best way.

A feature of both the pandemic and the construction industry itself is that it does vary considerably across the states and territories. In this part of HNN's analysis, we are going to look strictly at the broad overview in Australia-wide statistics, but then we'll look at the states and territories in three groups: the highly COVID-19 affected stats of NSW, VIC and Queensland; the less COVID-19 affected states of South Australia, Western Australia and Tasmania; and the Australian Capital Territory and the Northern Territory.

We can begin by looking at a broad overview of all residential construction building work done in Australia, including public and private, which is shown in Chart 1:

Chart 1 uses the ABS version of chain volume measures. These essentially adjust each year's prices to balance them with the previous year's prices. The goal is to enable prices to provide a good measure not for the total direct value of goods produced, but for the amount of goods produced. This is particularly useful in situations where the value of what is being counted varies widely.

This chart, as with the following charts, is based on the trailing four quarters of stats up to the June quarter - which is basically the standard financial year. The values for alterations & additions are shown on the right hand side vertical axis, as these expenditures are much lower overall than those for dwelling construction.

The big surprise, of course, is that despite the stimulus, overall expenditure on new residential builds declined for both the FY2019/20 an FY2020/21, and these are the first declines after seven years of growth. Less surprising, but much more unusual, is the sharp upwards trend in alterations & additions.

Chart 2 shows the percentage change in these numbers.

What begins to become evident from this is that even without the pandemic, FY2020/21 would likely have resulted in some kind of stimulus spending by the federal government in construction.

This shows something of a more nuanced picture of activity. The construction of private sector houses did recover in FY2020/21, though not back to the levels for FY2018/19. Meanwhile, however, multi-unit dwellings (other residential) continued the decline that began in FY2018/19 - for reasons largely related to the pandemic, most analysts would agree. Alterations & additions shows the same strong surge upwards.

Chart 4 shows the percentage change for the same statistics.

This clearly illustrates the effect of the stimulus in the most recent financial year, but also shows that the increase in the level of activity for houses remains below that for 2015, while the increase for alterations & additions is the highest it has been for at least 10 years.

The ABS stats for the commenced work probably do the best job of capturing the level of activity the stimulus has caused. Chart 5 shows the value of commenced work (using chain volume measures) for private residential construction:

The value of work commenced on private sector houses is the highest it has been for 10 years, and the same is true for the value of alterations & additions. Even for multi-dwelling construction, there is a slight tilt upwards, ending a two-year decline.

Chart 6 shows the percentage change for the same stats:

It is very evident from this chart that this stimulus is historically unique. The net change for private sector house commencements if over 45%.

Finally, Chart 7 differs from the previous charts in showing the quarter-on-corresponding-quarter change in the value of work commenced.

This shows the sharp acceleration that took place beginning in the December 2020 quarter.

These building activity stats relate to work that remains in the pipeline, and gives a sense of the available backlog of work making its way through the construction industry. Chart 8 shows the percentage change for the three measures of this work: work yet to be done, work not yet commenced, and work in the pipeline:

This shows a slightly unusual lack of synchronicity between the value of work not yet commenced and the other two measures, which indicate some delays in construction going into 2019.

What these statistics outline more than anything else is just how unusual the current stimulus has been. Building approvals, which we've shown previously, give some idea of what is being planned for the future, but building work done illustrates what is currently happening on the ground. If we factor in a likely continued expansion for the September 2021 quarter as well, it's evident that this activity is on its way to attaining levels that are not sustainable in the economy.

The difficulty is that it will be very difficult, once this stimulus is underway, to do anything to modify it. While there are some stirrings that the RBA may break its promise to not raise interest rates until inflation has increased to close to 2.5%, it's not just that this is poor policy, it's that it could be ineffective as well.

It's poor policy because if there is another financial crisis in ten years and the RBA needs to cut rates again, the market will not accept any guaranties about how long the low rates will remain in place. And it would be potentially ineffective because the major effect of an increase in rates by the RBA is to indicate there may be subsequent, further increases, and if one raise seems unlikely, three or four in a row seem pretty impossible - at least until mid-2023.

On a more long-term, "macro" level, the real concern for the economy is that while Australia's current goal seems to be to get back to 2019, other nations are already moving into a different future. The US, for example, has seen a boost in productivity, and the impact of the pandemic has been a clear boost to digital industries. We could see, as international connections are resumed, that Australia has slipped further back.