While state and federal governments are focused on 70% and 80% vaccination targets, there are lower targets that provide a better guidance to managing the pandemic. 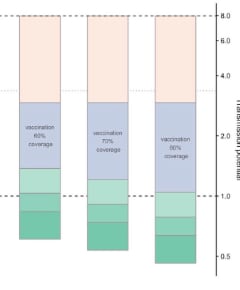 Hidden inside the Doherty's model are some additional, helpful conclusions

While state and federal governments are focused on 70% and 80% vaccination targets, there are lower targets that provide a better guidance to managing the pandemic.

This is the time of year when many businesses are revisiting forecasts for this financial year originally developed in May. That is, if they have been developed very much at all, as it has become difficult, in this pandemic time, for any business to come up with a forecast that makes sense.

That process has been helped along a little by what has become known as "the Doherty paper", which bears the somewhat modest title of the "Doherty Modelling Report for National Cabinet" (DMRNC). As is not uncommon for this kind of contribution, the reporting on it has been vigorous, but not really as helpful as it could have been.

That's because the entire national discourse, at the moment, has become focused on two numbers: 70% and 80% - which are the rates of adult population full vaccination where it will be possible to change how the COVID-19 pandemic is managed.

One thing we've learned in this pandemic is just how often both politicians and scientific opinion get things a bit wrong - curiously, this time, by generally being too optimistic. It seems to HNN that the forecasts of reaching 70% vaccination by October 2021 are part of that optimism. Some of that has to do with the exigencies of vaccine supply, and some of it is based on, we believe, an underestimation of how much resistance there is in the community.

A better, calmer analysis of the DMRNC indicates that even the 70% goal is not as vital as has been made out. In fact, there are substantial benefits to be obtained if 60% is reached. However, those benefits are highly conditional on the policy being pursued by individual state governments.

It is evident that there are two poles to the policies of state governments. On one hand there is the NSW approach, which is one of very moderate restrictions, targeted to specific areas as much as possible. On the other side, there is the VIC approach, of very tough restrictions and a high level of compliance enforcement, taking in very broad regions.

Most states - Western Australia (WA), Tasmania (TAS) and South Australia (SA) - are much closer to the VIC model than the NSW one. Queensland (QLD) is somewhere in the middle, but it is leaning more towards VIC than NSW. In fact, NSW seems to be headed down a path of relative policy isolation in Australia.

One of the core insights offered by the DMRNC is that there are three key elements that affect what it terms the "transmission potential" (TP) of the SARS-CoV-2 virus at any particular time, with a TP of 1.0 representing steady state (every infected person subsequently infects just one other person), below 1.0 a decline in infections, and above 1.0 an increase in infections.

Those three elements are: the percentage of population effectively vaccinated against infection; the Public Health and Social Measures (PHSM) in place, which range from social distancing to lockdown restrictions on movement and contacts; and the "test, trace, isolate, quarantine" (TTIQ) regime in place.

TTIQ is presented by the DMRNC as either being "optimally" or "partially effective", a factor that is based largely on the peak case-load created by other conditions.

Putting all those options together gives rise to a set of graphs, which were also used by the prime minister in first introducing the conclusions of the DMRNC.

To zoom out on these charts for a moment, there is a point being made in the DMRNC by presenting these together. What separates the charts is the level of TTIQ capability, and the point being made is that before any form of restriction easing can be put in place, it is necessary to first reduce the number of active emerging COVID-19 cases to a level where TTIQ can function.

Though it is even more complex than that, as the quality of delivered TTIQ also depends on PHSM making the task easier. As the DMRNC states:

Baseline TP will be influenced by spontaneous and imposed changes in physical distancing behaviours, the number of social contacts on average between individuals and the timeliness of test, trace, isolate, quarantine (TTIQ) measures. We use a starting TP of 3.6 for the Delta variant based on averaged observations from NSW in March 2021, a period with minimal social restrictions and no major outbreaks. TTIQ assumptions are based on the performance of the Victorian public health response at the height of the 'second wave' in 2020 as our best estimate of achievable effectiveness at high caseloads.

Or, in other words, vaccination is not a universal panacea. Without systems in place to keep the case incidence low, and TTIQ functioning at a high level, PHSM restrictions will always be necessary.

This brings the DMRNC to considering the likely scenarios that will emerge in terms of periodic increases in PHSM - what Prime Minister Scott Morrison and others refer to as "short, sharp hard lockdowns". As the paper states:

TP estimates with and without stringent PHSM can be used to calculate the approximate proportion of time those stringent measures would need to be in place to prevent exceedance of health sector capacity over a hypothetical long-term. This static analysis can indicate the plausible societal and economic impacts of the PHSM required to constrain transmission under each scenario and coverage over the long-term.

Table 1 illustrates this situation more precisely. This table is a distillation of four tables presented in the DMRNC. Those tables provide estimates of how much time will be required in moderate or strict lockdowns given the quality of TTIQ available (which depends on the case load) and the extent of vaccination. The predicted outcomes in the table presume an ongoing, background PHSM at a low level.

Again, the most important element is that low case numbers are vital to reduced restrictions. Even at 70% vaccination, with high case numbers more than half the time would need to be spent in moderate lockdowns, or more than one-fifth the time in strict lockdowns.

With low case numbers, and consequentially optimal TTIQ available, with just a 60% vaccination rate as little as 6% of the time would need to be spent in strict lockdown (basically an eight-day lockdown every four months). At 70%, it would be possible to remain lockdown-free - but, again, with ongoing, low-level PHSM measures.

It is understandable that at the moment there is something of a tidal pull towards hoping that things will return to "normal" in the future. However, looking at countries such as the US and Britain, it would appear that even in areas where 80% vaccination rates are reached, it will still be necessary to pursue containment measures. There is also the possibility that we will see versions of the SARS-CoV-2 virus emerge that will require new vaccines, or which have additional consequences for the infected.

As such, HNN thinks that a prudent course in forecasting and planning for the future is to presume that we will likely be closer to the world envisaged by the 60% vaccination predictions. There will still be lockdowns, in other words, but they will be less severe, and last for a reduced period of time.