Each power tool company has its own strategy for batteries made with the 21700 battery cell - some go for power, some for small size and lower weight. For ergonomic reasons these battery packs will suit the modern tradie. 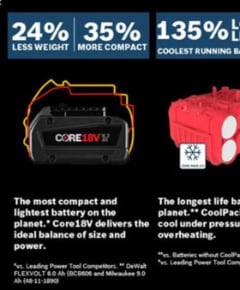 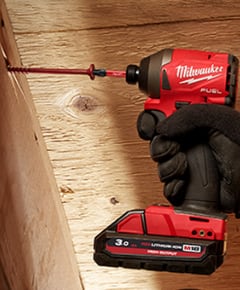 Each power tool company has its own strategy for batteries made with the 21700 battery cell - some go for power, some for small size and lower weight. For ergonomic reasons these battery packs will suit the modern tradie.

There has been a combination of confusion and speculation about how the development of Lithium-ion (Li-ion) power tool batteries would be affected by the change in cell size.

Just to go over the basics, virtually all power tool batteries use a standard size of cylindrical cell in their batteries. Each of these cells produces a nominal voltage of 3.7V. These cells are combined in "layers" of five batteries connected serially in their layer to produce an output of around 18V.

To increase the storage capacity (represented as amp-hours - Ah), more than one layer can be added to a battery, and connected in parallel. A single layer battery is referred to as a P1 (for Parallel 1), a two-layer battery is P2, and so on.

Up until about 2017, there was only one common type of battery cylinder that was available, and this has the designation 18650. That relates to the dimensions of the battery, which is 18mm in diameter, and 65mm long. That size and shape was developed in the early 1990s, and essentially copied the overall look of the AA battery (which is about 14mm in diameter and 50mm long).

The electric car maker Tesla was one of the driving forces behind the development of the new alternative to the 18650 cell, which is the 21700 cell. This designation relates, as you would expect, to its dimensions, which are a 21mm diameter and a 70mm length. Those dimensions were the result of scientific analysis, which showed this was a more optimised configuration when it came to producing power.

The result of its increased size and optimised shape is that the 21700 battery cells can each produce between 3.0Ah and 4.0Ah of charge. This is an increase over the 18650 cell rating of between 2.3Ah to 3.6Ah. In general, in fact, the 18650 cells when used in batteries for power tools are usually limited to between 2.5Ah and 3.0Ah.

We can see how this has played out in the development of the sizes of power tool batteries. Most of us probably have at least one small 2.5Ah battery - that is a P1 battery with five 18650 cells rated at 2.5Ah each. The most popular size of battery today is the 5.0Ah unit, which is a P2 battery, two five-cell layers in parallel, also rated at 2.5Ah per cell.

With the 21700 battery the P1 configuration can provide between 3.0Ah and 4.0Ah. These newer style power tool batteries are a little bigger than the standard 2.5Ah battery, of course, at least 5mm wider, 3mm taller and 15mm longer - but they are lighter and less bulky than a two-row battery of the 18650 cells.

One thing that is evident is that the Bosch battery uses higher quality interior components. Much of this design is actually through necessity. The 21700 can generate more heat than the 18650, and most of these components are designed to help better dissipate that heat. Without this change, excess heat would tend to make these batteries wear out faster.

The two companies with the most similar strategies are Milwaukee and Bosch. Both have decided to market the new and improved batteries as a "premium" range. Bosch is the most direct about this, branding these batteries as "ProCore", and promoting their advanced features. Milwaukee has essentially added the batteries more subtly to its existing range, designating them as "high output", but also marketing them on a feature basis.

There are some similarities between the strategies of Makita and Hikoki. Makita at the moment does not produce any 18V batteries using the 21700 configuration, but it does make 21700 batteries for its 40V range.

Hikoki makes 21700 batteries for its Multi Volt range. This is a very interesting range of tools. The technology is similar to that used by DeWalt on its FlexVolt range. Where DeWalt switches between a parallel and serial configuration to produce either 18V or 54V, Hikoki does the same to switch between 18V and 36V. The company relies on the power density of the 21700 to make batteries that are still compact and lightweight, but can support the 36V output.

As for DeWalt, its strategy is difficult to follow. As far as HNN can tell, there really isn't a specific designation for 21700 cell based batteries. It appears, for example, that it is not using the newer cells in its FlexVolt range, but some 18V batteries, such as its 6.0Ah XR, do use the 21700.

How will the 21700 batteries affect the overall tool market? Up until 2020 there has a great deal of emphasis placed on "maximising" battery size and capacity. Since about 2014, tool manufacturers have proudly announced the growing capacity of their most recent batteries, from 8.0Ah up to (today) 15.0Ah. There has also been a steady increase in available battery voltages, which now run up to 80V.

However, there is a growing understanding in the trades that finding the biggest battery and whacking it on the end of your impact driver tends not to be that good an idea. Coupled with tools that are becoming more lightweight and more efficient in the use of current, tradies now understand that smaller batteries have both ergonomic and health advantages.

Because of that HNN thinks that we will start to see the P1 configuration 3.0Ah to 4.0Ah batteries begin the dominate at least half of the market by 2024. Coupling these with slightly smaller, compact 18V tools will produce a better user experience for many trades, including tilers, electricians and plumbers.

It will also be interesting to see what effect the newer cells have on the 12V tool market as well. As you need just three cells to make a P1 battery, that means you can have ultra-compact 4.0Ah batteries, which could help to lift the smaller tools into a more competitive position.