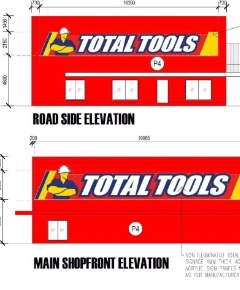 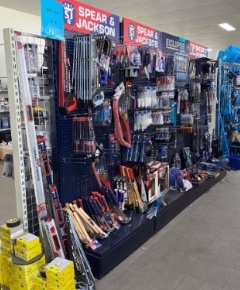 A Total Tools store could soon be located on Johanna Boulevard in Bundaberg (QLD).

A material change of use for a hardware and trade supplies development application has been lodged with the Bundaberg Regional Council for a site that previously had a Chipmunks Playland and cafe. STMC Enterprises is listed as the owner and applicant.

The proposed development would occur within the existing development footprint, not requiring any extensions to the building. The building footprint is just over 909sqm and covers about 35% of the site.

The tools and hardware business would expect up to six stock deliveries per day, mainly in the mornings.

Whilst the development does not directly support industry activities, the proposal would be compatible with the existing industrial and commercial uses within the precinct.

It also said that the long-term use of the land for industrial purposes would not be compromised because the existing building could be returned to an industry use.

The proposed development is a natural consequence of the established character of the precinct, the zoning of the land and is a logical development of the site.

The planning scheme sets an expectation that a mix of commercial and industrial activities are supported within the locality...

... the business would provide some secondary support to industrial uses through the selling of tools.

The Total Tools application also states the new business would provide a boost to the region.

The proposal provides a direct public benefit to the regional catchment with respect to economic development and employment.

The Total Tools Material Change of Use application is currently with Bundaberg Regional Council's Development Group for assessment.

Sunshine Mitre 10 Group has taken up three commercial blocks in the new Trade and Construction precinct in the Aura Business Park to build its latest store. It is located alongside the Bells Creek Arterial Road, which was due to be connected to the Bruce Highway.

Sunshine Mitre 10 general manager Neil Hutchins said the new store would be part of a steadily expanding network across Queensland. He told the Sunshine Coast Daily:

With Aura being a thriving hub of construction with thousands of homes being built over the next 20 years, we know there will be a huge appetite from tradespeople, owner builders and homeowners alike.

And with Aura to be home to 50,000 residents it fits with our focus on community, supporting community and sporting organisations in the towns in which we operate.

Stockland's senior economic development manager Matthew Byrne said Aura was positioned "in the heart of the largest investment zone in the region".

Once finished, the estate due to home 50,000 residents was planned to include two business parks, 10 sporting grounds, 25 community facilities, 20 educational facilities and 700ha of conservation and parkland areas.

Earlier this year, Nutrien Ag Solutions bolstered its local presence with the purchase of WA-based business Mirco Bros. The acquisition includes stores at Manjimup, Henderson and Neerabup, all located in WA. They will be rebranded Nutrien.

Mirco Bros was established by brothers Vince and Peter Mirco and their wives June and Jean in 1968 and has been owned and operated by the family ever since.

It stocks a wide range of fertilisers, chemicals, garden supplies and agricultural equipment to cater for commercial, market and backyard gardeners. The business also supplies tractors and associated implements to WA's vegetable, horticultural and vigneron industries.

Nutrien Ag Solutions region manager Andrew Duperouzel said Nutrien was proud to build on the knowledge and relationships Mirco Bros had built up during the past five decades of serving WA growers. He told Countryman:

We are very pleased that Martin Mirco (son of the late Peter Mirco) and the existing branch managers will remain within the branches to continue to provide the same great service, particularly to the horticulture industry in the South West.

The horticulture industry is an important and growing part of the agriculture industry in WA, and we are keen to support growers to be as productive and profitable as possible through great products and advice."

As a company, we have great confidence in the WA industry and are willing to invest to see it grow.