The new face of DuluxGroup

DuluxGroup has entered, according to its CEO, a new chapter in its rich history after acquisition by Nippon Paint in late 2019. While Nippon has found a use for some Australian products in new markets, will DuluxGroup bring Nippon technology home? 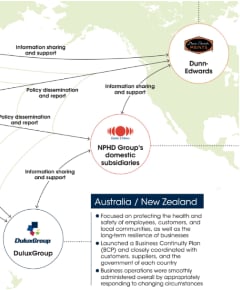 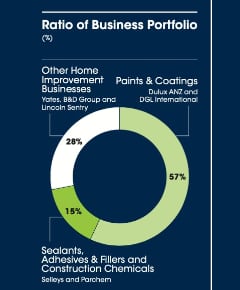 The new face of DuluxGroup

DuluxGroup has entered, according to its CEO, a new chapter in its rich history after acquisition by Nippon Paint in late 2019. While Nippon has found a use for some Australian products in new markets, will DuluxGroup bring Nippon technology home?

As is often the case after an acquisition, working out how well Australia's DuluxGroup has been doing since August 2019 is somewhat difficult - and has been made yet more difficult by the COVID-19 pandemic.

That is particularly the case because the company was acquired by Nippon Paint Holdings (for $3.8 billion in August 2019), which is both a sprawling worldwide company and based in Japan, where reporting and management structures differ substantially from Australia, the US and the European Union.

In overall terms, NPH performed well during FY2020, bringing in JPY781 billion ($9.2 billion) in sales, above its projection made in 2017 that it would reach JPY750 billion in sales. However, its profit was below the forecast JPY105 billion at JPY87 billion ($1 billion). The company put its underperforming operating margin down to problems from the COVID-19 pandemic. NPH's current medium-term goal is to achieve sales of JPY1100 billion by FY2023, along with JPY140 billion in profit.

As the slide from NPH's results presentation indicates, the Dulux sales contribution is set at JPY148.3 billion ($1.76 billion), with an operating margin of 11.6%. (Dun & Bradstreet suggests the number is closer to $2.0 billion.) NPH estimates that in decorative paints, Dulux grew its market share from 48% in 2019 to 50% in 2020.

It's difficult to tell exactly what NPH is counting as "DuluxGroup" in its operations, but that result is broadly in line with the sales results for the company prior to its acquisition, allowing for currency fluctuations. In its Integrated Report for FY2019 (similar to an annual report, only substantially more complex), NPH lists the revenue for that year as being $1.8 billion, which included eight months prior to acquisition.

A more revealing look at how the NPH sees Dulux is revealed in the 2020 "Integrated Report" (IR2020), which covers results for 2019. This shows the following diagram for its worldwide operations:

This illustrates what NPH refers to as its "spiderweb" approach to international management, where subsidiaries are free to interact with each other (across the web), rather than having to direct all activity through a central hub (the "radial" plan) than then connects to all the subsidiaries. It's interesting that NPH sees Dulux as having a direct connection with NPH's other recent acquisition, the Turkish paint company Betek Boya (aka Betek Boya ve Kimya Sanayi).

The IR2020 also offers some insights from former managing director, Patrick Houlihan, who has continued in his management role, now as CEO and chairman. According to Mr Houlihan:

Becoming part of Nippon Paint Holdings is a new chapter in DuluxGroup's rich history, but its focus remains on maximising shareholder value by leveraging new opportunities as part of the Asia Pacific's number one paint and coatings company.

Specifically, this includes: 1. Building on the company's market-leading positions in Australia, New Zealand and Papua New Guinea; 2. Contributing to Nippon Paint's position in Asia through DuluxGroup's own capabilities and portfolio-for example, Selleys adhesives and sealants; and 3. Continuing to explore pathways for material growth in the UK, Europe, and beyond-for example, Craig & Rose in the UK and Maison Deco in France.

DuluxGroup's businesses are already benefiting from collaboration with other parts of Nippon Paint, and everyone at the company is excited by this new opportunity.

The IR2020 also supplies some familiar graphs of the makeup of the Dulux business:

Last year, NPHD acquired the DuluxGroup (DGL) in Australia and New Zealand, as well as Betek Boya in Turkey. Besides learning from these two great management teams, NIPSEA sees growth by tapping into DGL's Selleys range of sealants, adhesives and fillers as well as its geographical expansion in the region peripheral to Turkey.

Judging by the press releases this seems to be a process well underway:

Chen Lee Siong, General Manager of Group Trade User Business at Nippon Paint Malaysia said, "The expansion of our product offerings through Selleys will further enhance Nippon Paint's end-to-end home solutions, designed to meet the needs and demands of Malaysian consumers. This strategic integration paves way for both Nippon Paint and Selleys to further grow within the Malaysian market - creating an accessible and convenient shopping experience for consumers."

What is of most interest to the Australian hardware retail industry is how the acquisition of DuluxGroup will shape its development over the next three years or so. While it's good to see Australian technology spreading through Asia, the question has to be asked why it takes an acquisition by a Japanese company for that to happen? Not that DuluxGroup is necessarily to blame, for the government policies that once promoted Australia as being more a part of Asia, rather than some awkward outpost of the Anglo-sphere, seemed to have vanished post-Paul Keating. Given the growth opportunities, that might be worth a revision.

But for the Australian industry, the question will be how much technology will flow into this market from overseas. There are some new developments announced by NPH that could be of real interest. For example, alongside the development of anti-bacterial and even anti-viral paints, the company is developing DIY paint that resists splattering when used with a roller. If the DIY paint market continues to grow, that could be more attractive even than paint longevity and wear resistance.

It's an easy guess that by the start of 2022, issues such as these will receive considerably more attention across Australian industry.