Distributed manufacturing will see 3D printers proliferate. The Creality CR-30 is a starting prototype for that future. 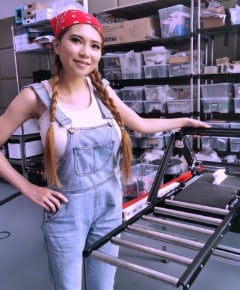 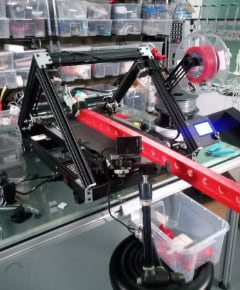 A conveyor belt makes it a mini-factory

Distributed manufacturing will see 3D printers proliferate. The Creality CR-30 is a starting prototype for that future.

One of the trends that HNN has been tracking for some time is the gradual move of 3D printing from hobbyists, prototyping and a few specialists into the mainstream. We strongly believe that we will see a move to "distributive manufacturing". Hardware retailers will have 3D printers in their stores, and be able to customise and print out on the spot simple items such as cabinet handles, brackets and flanges.

Creality is a well-known Chinese brand that has managed to take open-source designs, tweak them a bit, and produce reliable, easy-to-assemble 3D printer kits at a low cost. Recently, the company has become more innovative, and one result of this is the 3DPrintMill (Creality CR-30).

What makes this 3D printer unique is that instead of printing an object onto a standard metal or glass bed, it prints onto a conveyor belt. This enables two additional ways to print objects: it can print very long pieces (for example, a duplicate of a floor moulding for restoration purposes), and it can print multiples of a single object.

In the former case, the object just keeps moving through the printer as it rolls along on the conveyor belt, out to several metres in length, if needed. In the latter case, once an object is printed, the belt moves, dumps the object into a bin, and can start on a new project. The printer can utilise up to a 10kg roll of filament, to support these mass prints.

The person who instigated the program to produce the CR-30 is a well-known 3D printing expert, Naomi Wu. She started pushing for the printer in 2016, but it wasn't until 2019 that Creality became interested. Ms Wu worked with another developer, Karl Brown, who had produced a kit version of a conveyer belt printer. She wanted to use some aspects of his Open Source design, but also felt he should receive acknowledgement and payback for his work. The other important contributor to the CR-30's development is Bill Steele, also well-known in 3D printing circles.

Ms Wu was interviewed by Kerry Stevenson of Fabbaloo online magazine. Ms Wu pointed out that the printer is not for everyone:

The people who need the 3DPrintMill know exactly why they need it the minute they see how it works. It's like a Bridgeport milling machine or high-end gaming computer. People who look at one and are like, "what's that for?" probably shouldn't buy it.

This isn't for small figurines, it's not a good first printer for kids. I'm really targeting people or businesses who print long objects, like cosplay and prop makers, sign makers, restorers for crown moulding and other long decorative elements, but mostly those who need to fabricate 10-1000 objects - small scale manufacturing, Etsy and eBay stores, local machine shops as a cheaper alternative to CNC to offer customers, people printing PPE and emergency supplies - that kind of thing.

The printer will be available by the end of 2020, but it can be pre-ordered through Kickstarter.