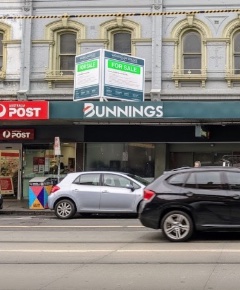 Plans for a redesigned Bunnings store have been submitted for Subiaco (WA); a proposal to build a store in the inner Melbourne suburb of Brunswick has attracted criticism; and the smaller format store in Seymour (VIC) is expected to open early next year.

Bunnings recently lodged plans with the local Development Assessment Panel (DAP) for a $28 million building. It purchased the site where the building is located on Hay Street, Jolimont (WA) three years ago for $13million.

The retailer withdrew plans for the Jolimont site after it received strong objections from the council and the community over traffic and design issues. Regional operations manager Hayley Coulson said there had been extensive community consultation for the new store, which will replace the Bunnings at Homebase in Salvado Road, Subiaco. She told POST Newspapers:

Bunnings has substantially modified the design from the original DA lodged in 2017 to address the feedback on our previous planning application. These modifications include the addition of a customer vehicle entry and exit point in Hay Street and the installation of gates at the rear laneway...

The rear building facade is proposed to be heavily landscaped with greenery, and building levels have also been adjusted along Hay Street to allow direct pedestrian access to the front of the store.

If approved, Ms Coulson said the store would represent an investment of more than $55million, create 120 jobs during construction and employ 30 extra people when completed.

All team members from the existing Homebase Subiaco store would transfer to the new store once complete.

Under a $21 million plan to build a warehouse store with 250 underground parking spaces in Brunswick (VIC), the Chamton building on Glenlyon Road would be demolished and replaced with a two-storey shop that backs onto nearby Pitt Street for truck access.

Bunnings currently leases a store on Sydney Road in Brunswick and it is up for sale. Toby Lawrance, Victorian regional operations manager at Bunnings, said moving sites would employ an extra 50 staff. He told The Age:

Bunnings has been part of the Brunswick community for five years and it's become clear that our existing store is too small to cater for demand from local residents. We're looking to move to a new store with space to offer a wider range of products that would also create around 50 further jobs for locals, in addition to the 50 team members currently employed at the Brunswick store.

Mr Lawrance also said the design was tailored to fit with the local area.

The design would not be a typical warehouse, but would have features such as a shopfront with window glazing, a cafe at the front of the store and a dedicated pedestrian entrance that fits in with local surrounds. While the site has a long-established industrial use, we value the views of the community and look forward to working with council to review and respond to community concerns as we progress the application.

A report by developers Metropol Planning said the existing Chamton building was underutilised by employing only 30 people.

However, Moreland Council has received more than 350 objections to the proposal, which would have a maximum height of 15.4 metres and taper down to 14.2 metres. It would include a cafe on the ground floor and an outdoor nursery on the first level.

A number of locals led by resident Andrea Bunting have organised to fight the development, which she said is almost completely surrounded by homes and would overshadow them in winter. She told The Age:

It's a huge, visually bulky development. We can't find any other Bunnings that's almost completely surrounded by homes. This is just unprecedented.

She said immediate residents were mostly concerned about the loss of sunlight, and that traffic was a broader concern for locals.

Ms Bunting, whose flat backs onto the site, argued the proposal would strip business from the nearby Lygon Street Nursery. She said a Bunnings store belonged in an industrial area where there were fewer pedestrians and cyclists.

The proposed underground car park would be accessed via Glenlyon Road. Trucks and heavy vehicles would use Pitt Street, a small residential street. Metropol Planning said there would be no impact on the safe and efficient functioning of Glenlyon Road or Pitt Street.

The plans also account for 14 bike spaces. Local planning rules would normally require 45 bike spaces but Metropol argues that most customers would buy bulky items and need to drive.

Moreland Council officers will consult affected neighbours and prepare a report, to be presented to councillors in November or December this year.

The central wall of the new Bunnings store located on Anzac Ave, Seymour (VIC) has recently been completed, with building work progressing the on the steel framing and roof. This store will sit across 4500sqm and have car parking for more than 70 cars.

Bunnings area manager Mary Corso told the Seymour Telegraph the new development represented a significant direct investment in the local community and would create a number of new team member positions. She said:

The new Bunnings Seymour will create up to 45 jobs for local residents and we're excited to bring a wide range of home improvement and lifestyle products to the Seymour community.