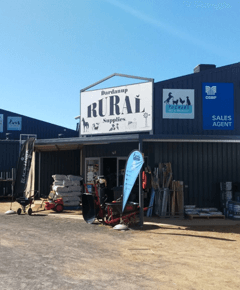 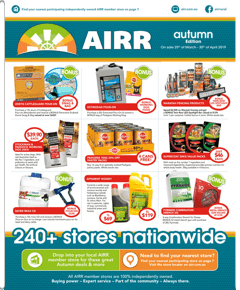 It is offering a deal to acquire AIRR

The $187 million takeover bid by agribusiness Elders for Australian Independent Rural Retailers (AIRR) will give it an entry into the wholesale supply of farm products for the first time.

We don't have any wholesale channel and AIRR is very strong in that area. About 100 of their members are in produce and hobby farming areas, so it's quite complementary to our business.

AIRR is also very strong in the pet supplies area. All the AIRR stores will continue to run independently, as they already are."

There's a great opportunity to leverage off both businesses, while still remaining independent.

Cox Rural has been running since 2002 and is a founding member of AIRR.

Mr Allison said the acquisition provided the opportunity for Elders to leverage AIRR's distribution and logistics coverage with benefits in improving the Elders supply chain. He told The Australian:

Helping us backward integrate through our supply chain can deliver a 10-15% margin gain.

The deal includes a purchase price of $157 million for the group and Elders will also pay out AIRR's existing $30 million in debt. While the Elders deal does not include ownership of the AIRR network of 340 independent rural supplies and pet produce outlets, it does provide a combined network of more than 550 stores.

Mr Allison said he hoped the deal would be completed by November. It is subject to approval by AIRR shareholders, the Australian Competition and Consumer Commission (ACCC) and the court.

The acquisition should help position Elders to compete more strongly with Canadian fertiliser giant Nutrien as it moves to complete a $469 million takeover of Ruralco.

Mr Allison believes there is a significant opportunity to add independent retailers in the fallout from Nutrien acquiring Ruralco, which is a leading wholesaler to independents through its CRT (Combined Rural Traders) retail operations. He said:

Our view is there are another 300 independents out there who may decide to move across to an alternative wholesale network.

The Nutrien takeover of Ruralco, if it secures regulatory and shareholder approvals, could see a network of 654 Landmark and Ruralco stores across Australia. There would remain about 360 rural stores outside either network.

Elders, which turns 180 this year, already has more than 17% rural retail market share behind Landmark and Ruralco. Mr Allison said if both deals were approved, "it would make us clear one and two".

Established in 2006, AIRR was founded by long-time rural retailer Peter Law to support independent rural stores and pet and produce storeowners through group buying power but without franchise costs or obligations. The business supplies 240 independent stores and 100 Tuckers Pet & Produce stores with more than 6000 animal health, feed and general merchandise products. It is supported by a network of eight warehouses around Australia servicing over 1500 customers.

The group also owns and operates five retail locations in Victoria and is listed on the Primary Markets Exchange.

AIRR comes with some major intellectual property assets. It has 190 product registrations with the Australian Pesticides and Veterinary Medicines Authority under its own brands: a number of crop protection chemicals under the Apparent brand, along with other animal health and general merchandise products under the Independents Own label.

Elders' acquisition would give it much greater exposure to the higher margin pet and animal health market.

AIRR has annual revenue of about $500 million and forecast earnings of $22 million for the 12 months to September 30, according to a report in The Australian Financial Review.

As AIRR managing director, Mr Law will remain in his role and replace Mr Allison as Elders' biggest individual shareholder with about 1.8% of the company. Mr Allison will become AIRR chairman.

The Elders takeover of rural wholesaler AIRR has attracted the attention of the competition watchdog as it holds a public inquiry into the consolidation of the rural services industry.

Nutrien's earlier bid for Ruralco in a $470m deal is also being investigated by the ACCC and due to be decided on August 15. Ruralco has about 73 wholly owned stores as well as a host of independents, who are the focus of both ACCC inquiries into the sector.

The Elders-AIRR deal is expected to be decided on September 12. But Mr Allison said it had been talking to the competition regulator about the AIRR deal and was confident it would have no objections.

Sources have told the DataRoom column in The Australian that Elders may still be looking at the PGG Wrightson farm supplies business in New Zealand as an acquisition target.

PGG Wrightson offers Elders another entry into the wholesale rural services market. However the company falls outside the tax umbrella for Elders, resulting in higher payments of tax for the company. This could be seen as an argument against the acquisition.

PGG Wrightson, which is listed in New Zealand, sold its seeds operations to Danish company DLF Seeds for NZD421 million (AUD401 million) and has a market value of about NZD415 million. Analysts say PGG Wrightson is a good business and would be the right fit for Elders.

However Mr Allison has publicly rejected suggestions Elders might be looking at another acquisition.